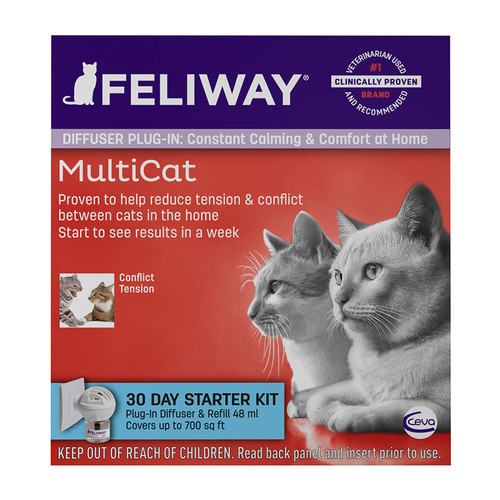 Feliway provides a calming experience for cats by mimicking feline calming pheromones. Feline MultiCat is specially formulated for multiple cat households, where the cats may be having some trouble getting along with one another. Feline Multicat helps calm down social interactions between cats, reducing aggression.

Feliway Multicat Is Best Used For:

For help with inappropriate urination, scratching, hiding, or other territorial or stress-based behaviors in your cat, consider a Feliway Pheromone Diffuser.

Compatible only with United States standard electrical outlets. Not to be used with an adapter.

How to use FELIWAY CLASSIC Diffuser 01:12

How to use the FELIWAY CLASSIC Diffuser and get the best effect from it. Diffuser is very easy to use just plug and play but where is best to put it. www.feliway.com

This product hasn't received any reviews yet. Be the first to review this product!