It's one of the biggest problems cat owners deal with—urinating outside the litter box. It can be frustrating to the point that it's also one of the top reasons that cats are surrendered to shelters or abandoned outside.

It's not that surprising that inappropriate urination is a problem with many housecats. After all, using a litter box for eliminating isn't a natural state for cats. Outside, they'd usually go in soft sand or soil. And urine is often a means for marking territory. Cats that are stressed mark more to help themselves feel better.

Luckily, there is hope for helping a cat that is urinating outside the box and ending the problem for good.

Why Do Cats Urinate Outside the Litter Box?

The first thing you'll need to consider to end a feline inappropriate urination problem is what's causing it. There are a lot of things that can trigger the issue, and sometimes, they have different treatments. Here are the most common causes:

How to Treat Inappropriate Urination in Cats

The first thing to do if your cat is urinating outside the box is to make an appointment with your veterinarian. The doctor will do a thorough physical exam and check a urinalysis and possibly blood work for a problem.

Next, thoroughly clean the soiled areas with an enzymatic cat urine cleaner. If you don't do that well, the kitty or other cats in your home will likely continue urinating over those spots to re-mark them.

If your cat's medical status is declared healthy by a vet, start working through the above issues one by one. Trouble-shoot each one at a time to determine what may be going on. For example, if the box is in a high-traffic area, move it somewhere quieter. If you're using crystal litter, try clumping. If you only have one box and three cats, boost the number of boxes.

Make sure you have a box in every significant area of your home (for example, on every floor). 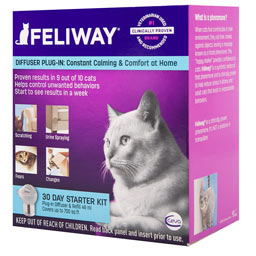 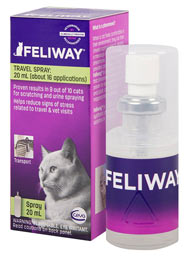 If you feel that your cat may be stressed, work to eliminate or decrease the stressors. Additionally, you can use Feliway diffusers and sprays in your home. This substance mimics the calming pheromones of cats and helps them feel better. Learn more: "Fighting Feline Stress with Feliway."

Increase your interactive playtimes and add more scratching posts to your home because those things are potent stress-fighters in cats.

Go over this article and make sure your litter box cleaning routine is up to speed: "How to Clean the Litter Box."

As you work your way through the possibilities, give your cat a few days to respond to each one. And remember, inappropriately urinating is a type of communication from your cat, not willful bad behavior. Don't punish your cat, which will increase stress and likely make the behavior worse or introduce other unwanted behaviors.