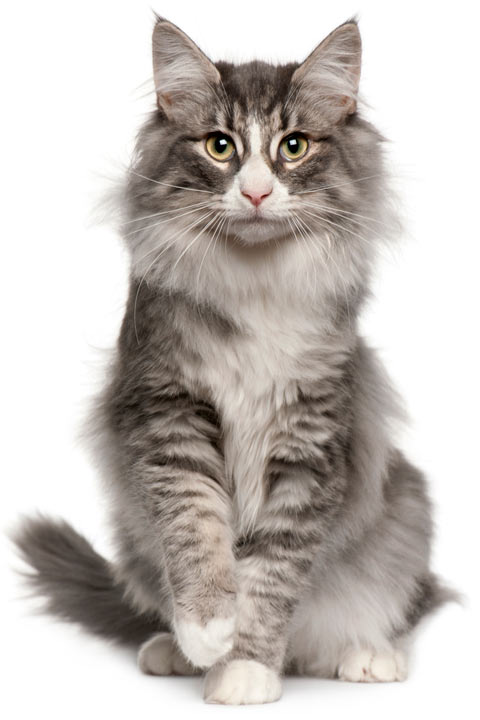 Norwegian forest cats, originally from Norway, were brought to North America by Vikings, who used them as mousers on their boats.

Wegies (wējēs), as they're called for short, are large and resemble Maine Coon cats quite a bit. They were built for cold Norwegian winters, and they have a water repellant double coat. They're strong, sturdy cats that have a gentle, sweet personality.

It's important that you don't let your Norwegian forest cat get overweight because the breed is already prone to hip dysplasia, which can be worsened by obesity. They take about 5 years to reach full maturity and size, usually winding up between 10 and 15 pounds.

Another health condition to which this breed is prone is hypertrophic cardiomyopathy, a heart problem which can lead to heart failure.

Wegies must be brushed once or twice a week to keep their undercoat from matting painfully. They love people, and it's important to spend time cuddling and playing interactively with your gentle giant.

This large breed loves to climb and hang out in high spots, so the Big Bed View: Everest Edition would be a great scratching tree to have for yours.

Some people with cat allergies report fewer problems with Norwegian forest cats than some other breeds. This is anecdotal, and an allergic person should not rely on it. Humans' allergies to cats are a result of the protein Fel d 1, which is found in cats' saliva, on their skin, and in their dander. The Siberian cat, among others, may produce less Fel d 1 than certain other cats, and Norwegian forest cats seem to be related to Siberians. Still, there is no truly hypoallergenic cat, so individuals with allergies may react to any cat.

At PurrfectPost.com, we encourage cat adoption. If you are interested in a Norwegian forest cat, we urge you to look for a breed specific rescue group that might have one that needs a new home.